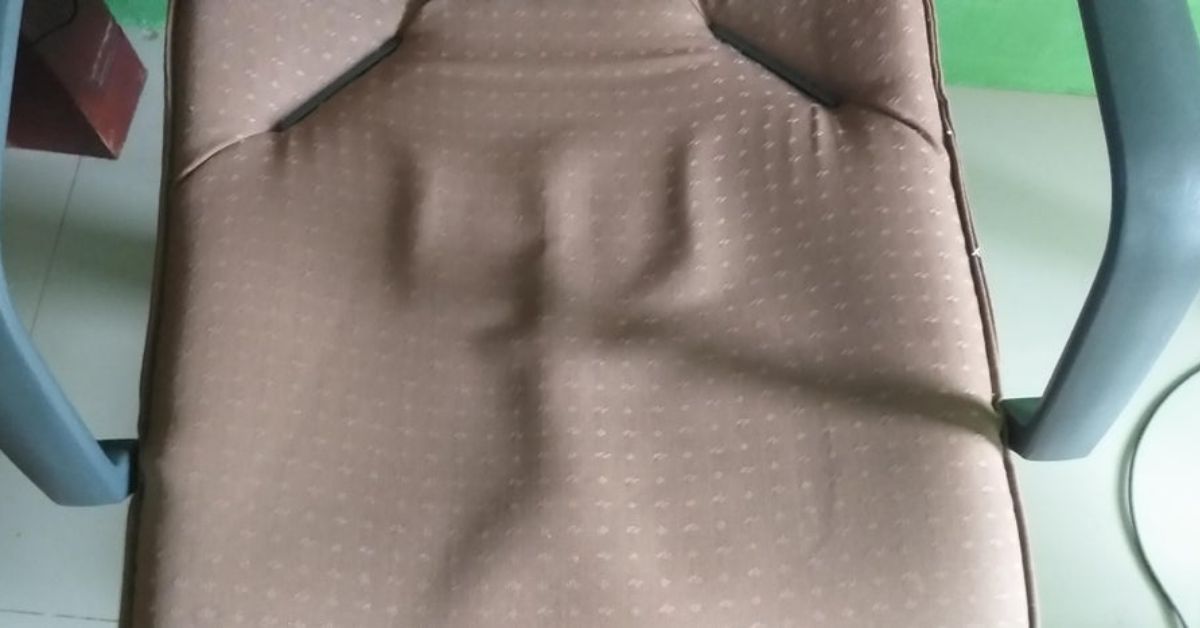 15+ Surprising Things That Somehow Got Left Behind

Pretty much the whole appeal of the CSI shows — apart from watching David Caruso work a pair of sunglasses — was the forensic work. I don't know how much of it was based in fact but at least for TV, it worked well to examine the myriad ways people left signs of themselves behind, things that could be traced back to them through science.

Hey, it even worked well enough that the show reportedly boosted enrollment in forensic science programs in the early 2000s, where presumably students learned that "zoom and enhance" was...not a real thing.

Of course, it's not just people that leave things behind and that we get evidence of indirectly. That sort of stuff is around us all the time. You just have to watch out for it.

1. Quite the light show! 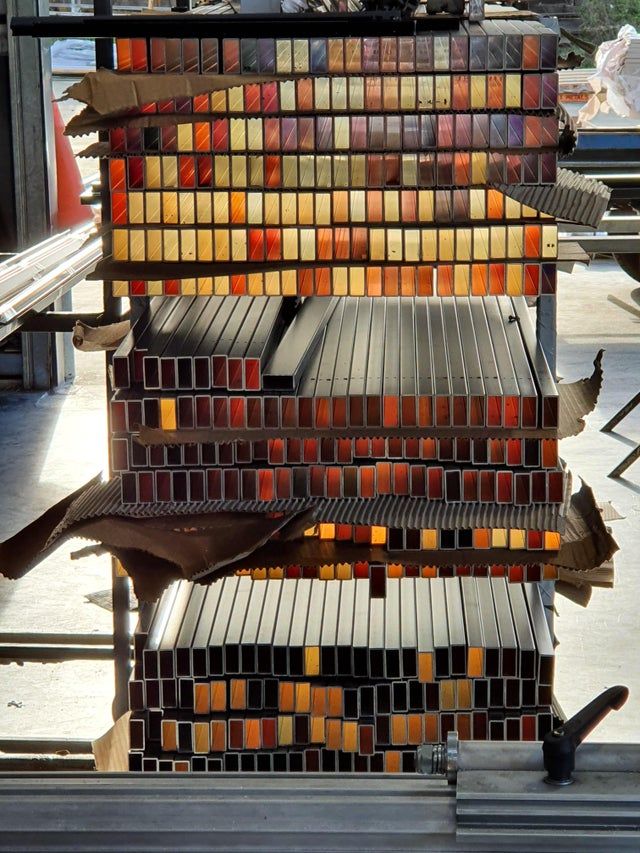 Honestly, the sun puts on a super light display in even the most regular of circumstances. But who would have guessed it would give us this show when reflected through some hollow lengths of aluminum? 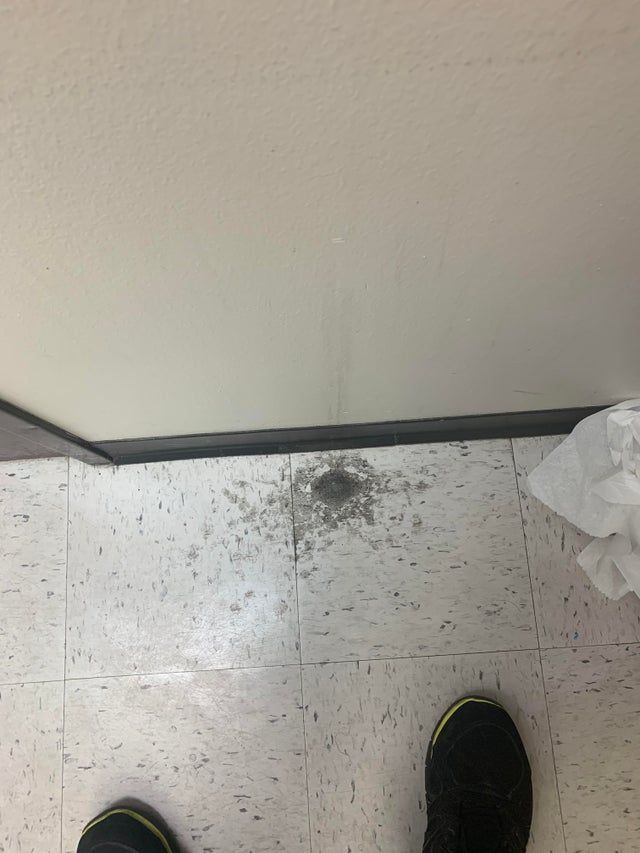 All it took to create that divot in the floor's tiles was for a hand sanitizer dispenser to spend a year above it.

Just the intermittent drips of alcohol slowly but surely ate into the tiles, basically ruining them. 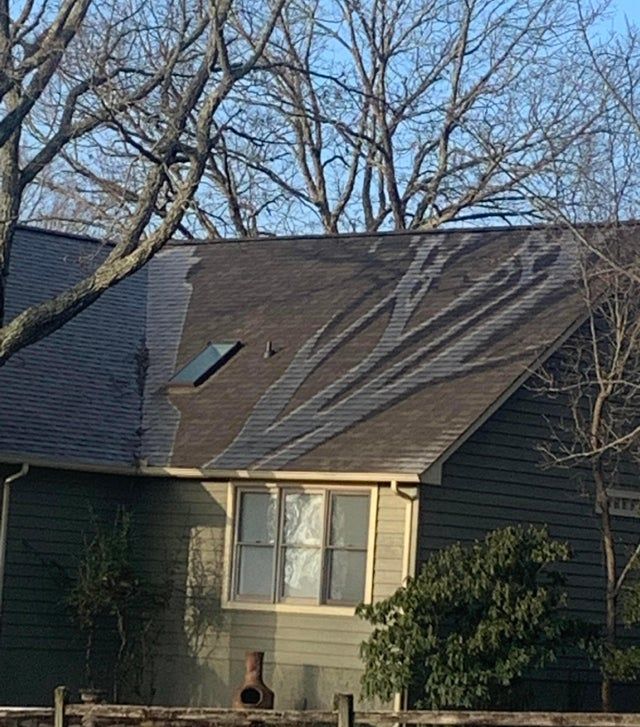 Winter is one of the best artists around, and frost one of winter's most potent mediums.

Nevertheless, it always astounds me how shade can so clearly shape frost patterns — and in this case, the shadows give it some texture, too, making it seem almost 3D. 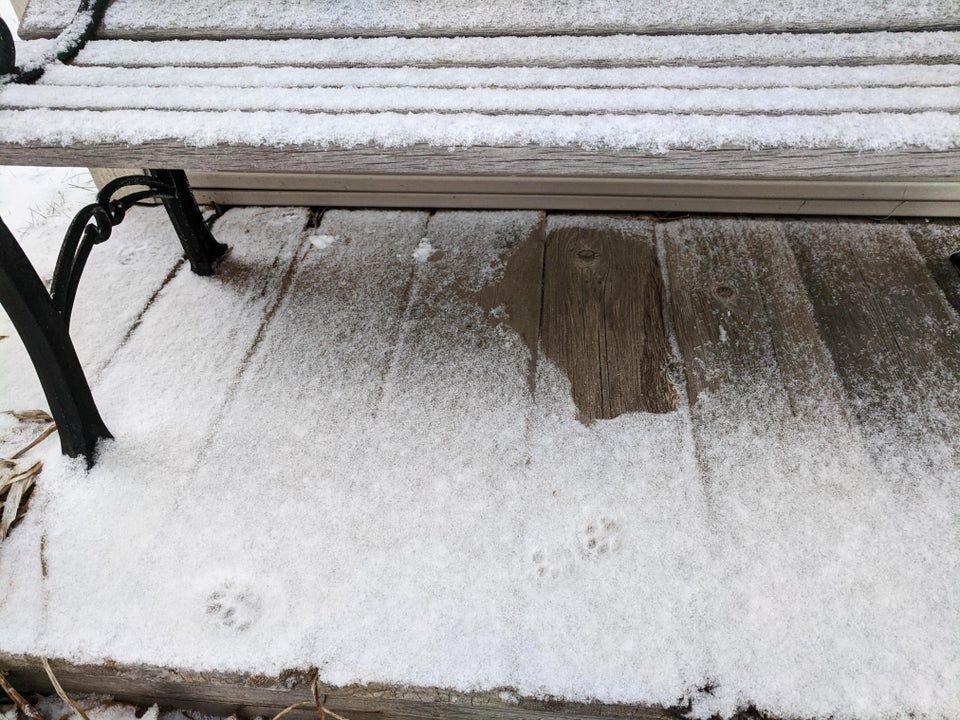 For a kitty out in the cold, a bench does seem like a good spot to wait out a snow fall. You can tell that one tried, just by the outline left behind.

Mind you, the fact that there is an outline suggests that it wasn't a foolproof plan. 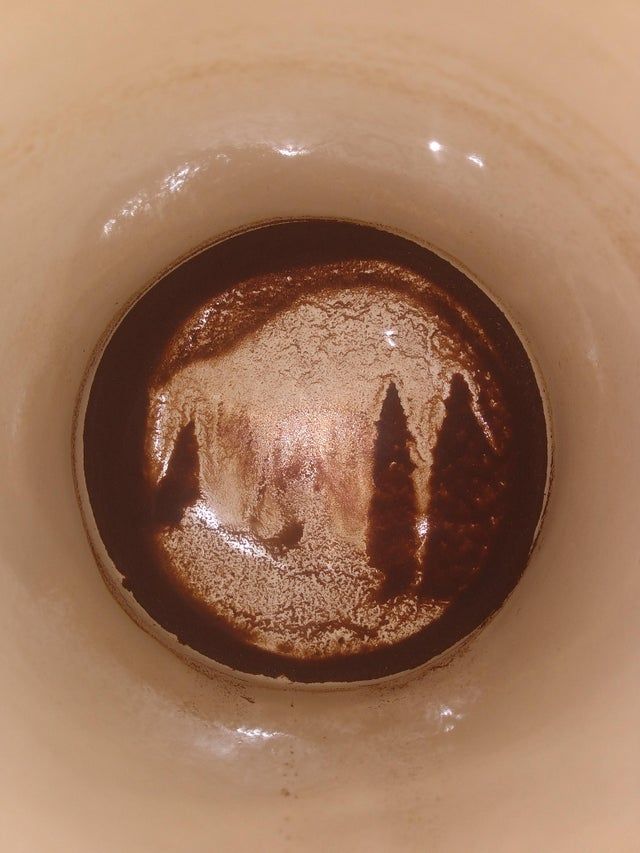 It kind of helps you understand how people might believe they can read their futures in tea leaves when you see coffee grounds looking like a wintry scene.

And nobody needed to arrange them, either; this is just what showed up in the bottom of someone's mug. 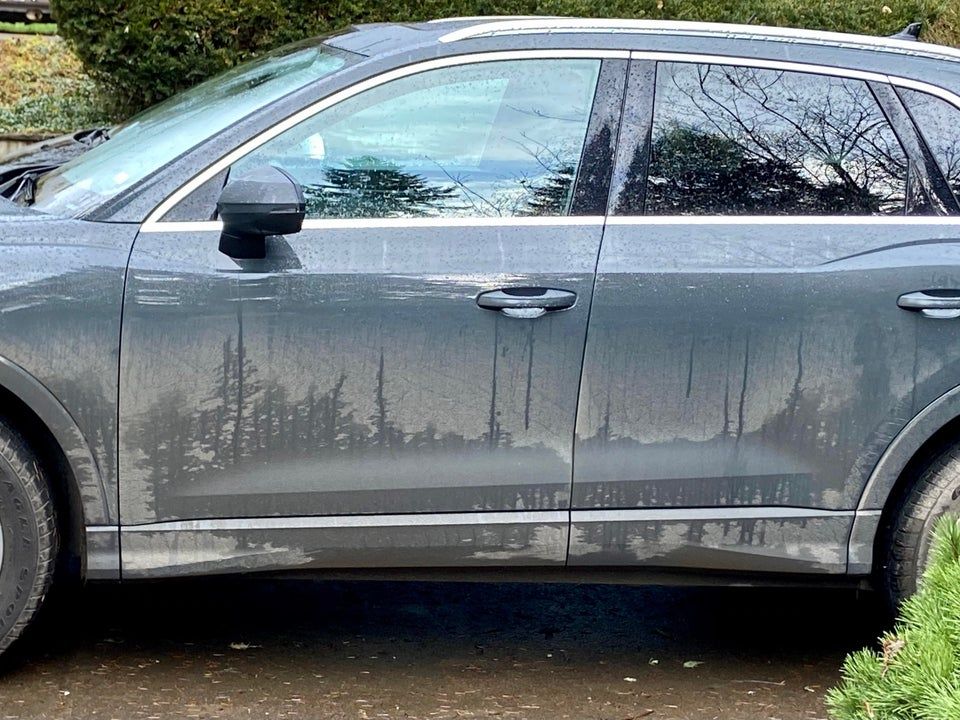 That's a scene right out of Bob Ross — it's easy to imagine pine trees encircling a quiet, calm lake when you look at the side of this car.

And it's just made of water marks finding their way through a build-up of salt and grime. 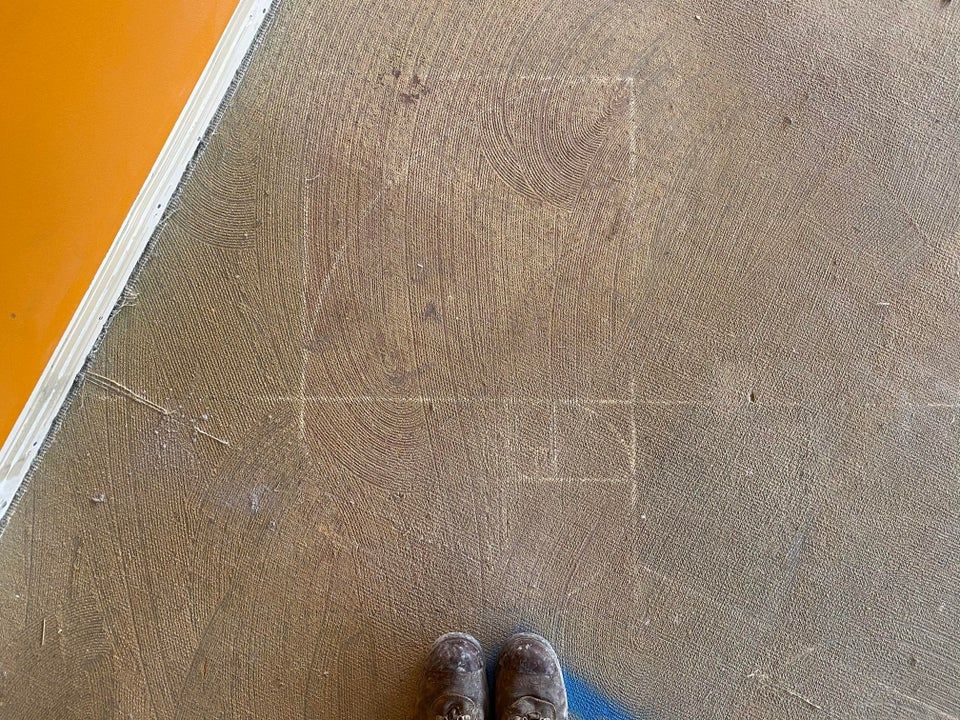 Someone re-doing their floors found this Fibonacci sequence underneath their carpet. Not sure why it would be there, though. Maybe someone was trying to summon Dan Brown?

8. Didn't even know that could happen. 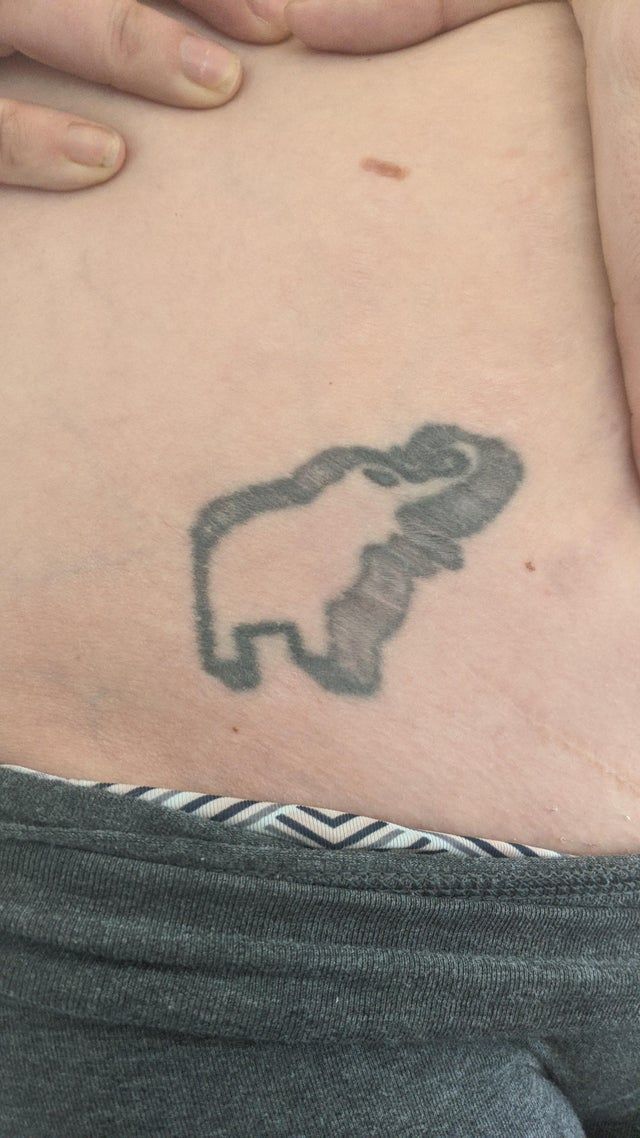 This woman's elephant tattoo was once just a simple line drawing. Now, it has dimension because she got pregnant — her stretch marks stretched the tattoo out as well. And if you ask me, I think it's an improvement.

It has depth now, and a good story and important memory to go along with it. 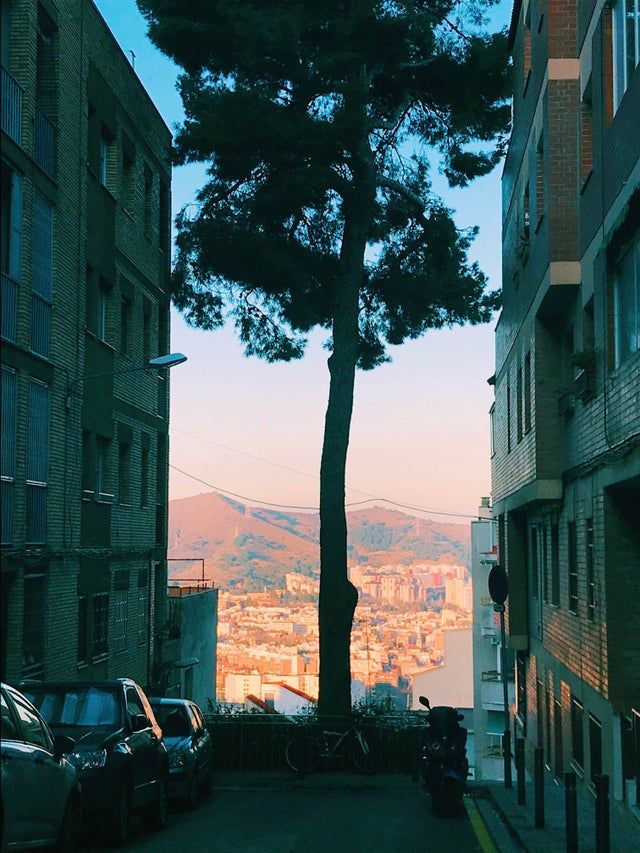 This has to have been done on purpose, right? It can't be mere coincidence that the shape of the wire follows the line of the mountains in the background so perfectly, can it? 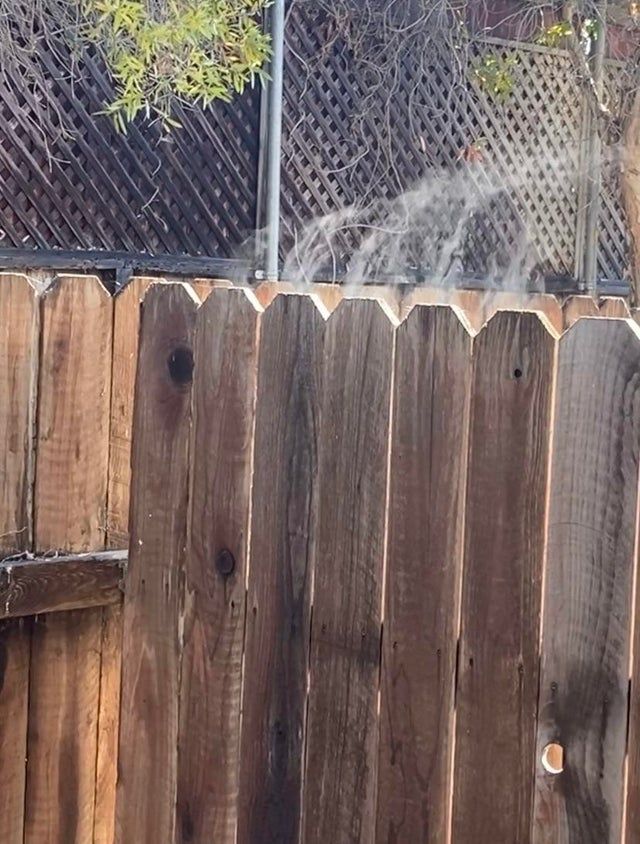 You can tell the weather got a bit weird here because the day went from rainy to sunny so fast that you can see water evaporating from the fence planks soaked by the rain. 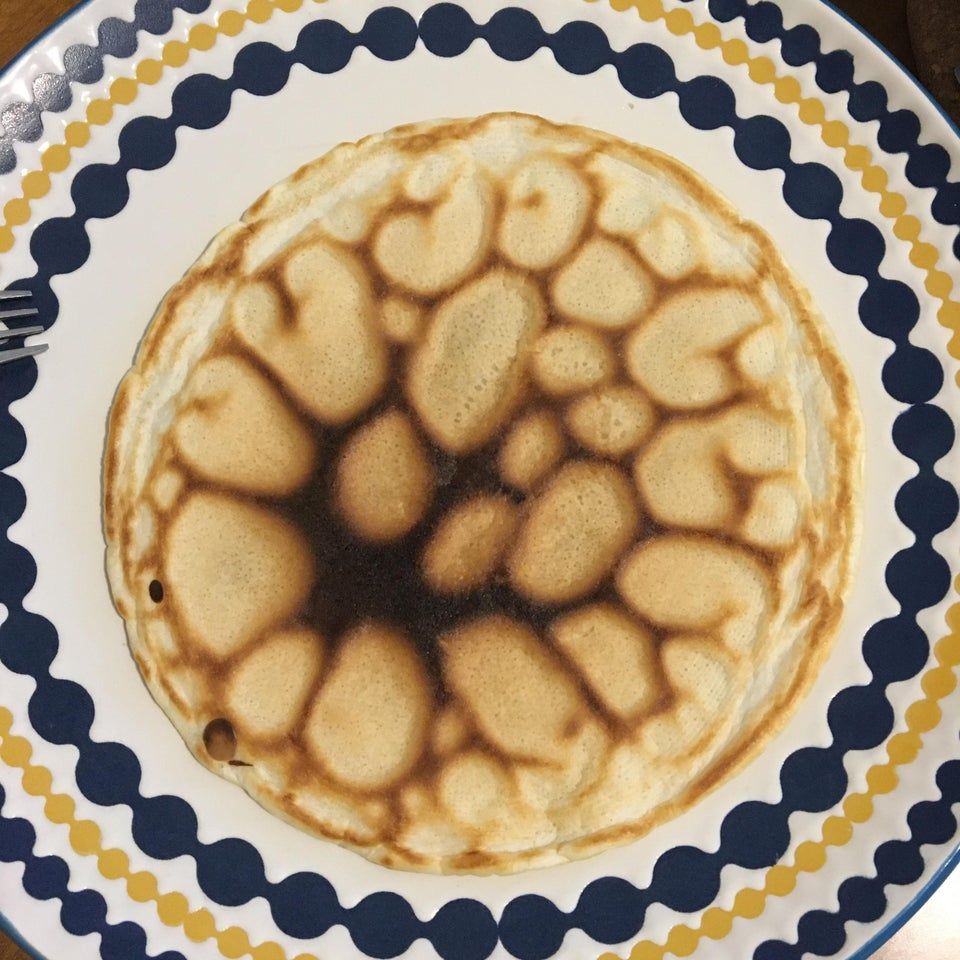 Maybe it's the plate, but I'm kind of getting lost in the pattern on this pancake. I don't know how you even make it look like that unless you have a unique pan you cook it on.

It's a weird one — but maybe it would help the syrup stick? 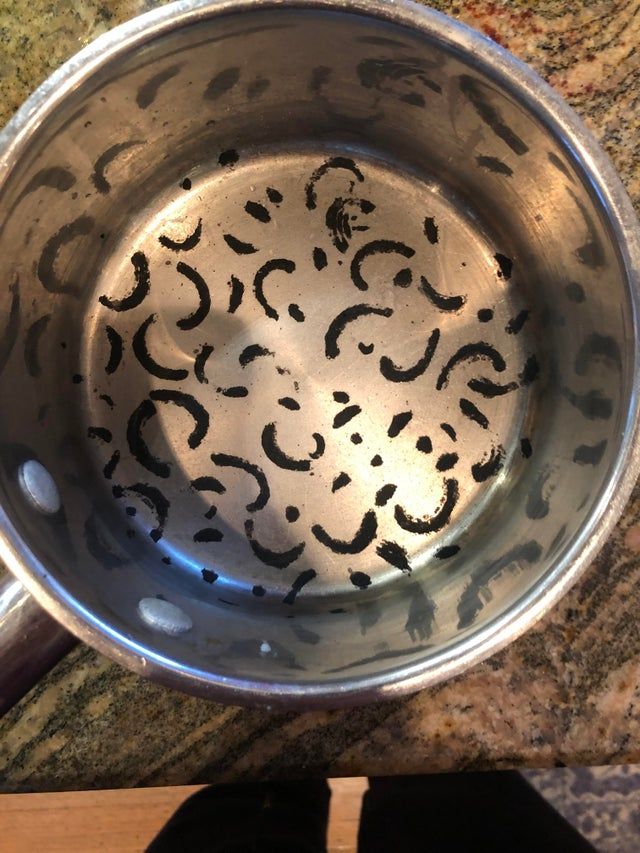 Usually when I burn a meal, I end up with nothing but regrets and some heavy-duty scrubbing. B

ut the person who burned their pasta in this pot managed to get a pretty neat pattern in the bottom. Even if it never comes off, it will be interesting to look at. 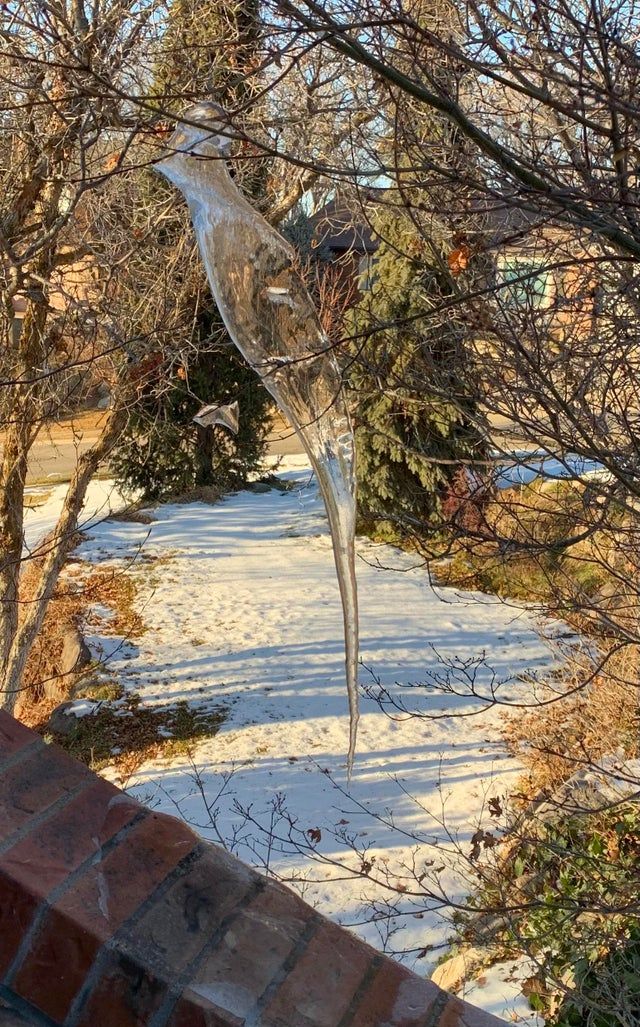 Have you ever seen an icicle that looks more like a bird? It would be difficult to make one on purpose unless you had a mold. 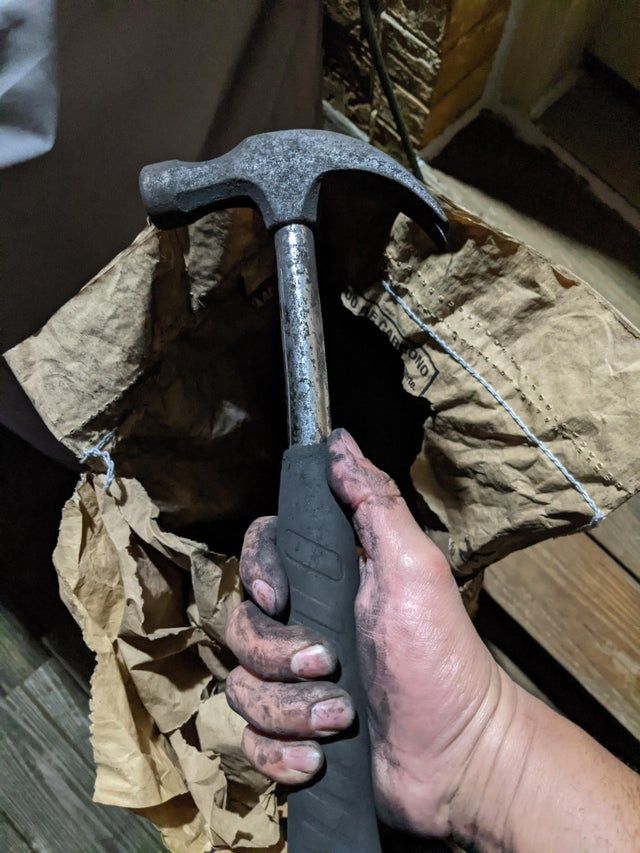 Much like the prize in a box of cereal, this person found a hammer in the bottom of a bag of charcoal. I somehow doubt it was a giveaway or promotion, however. 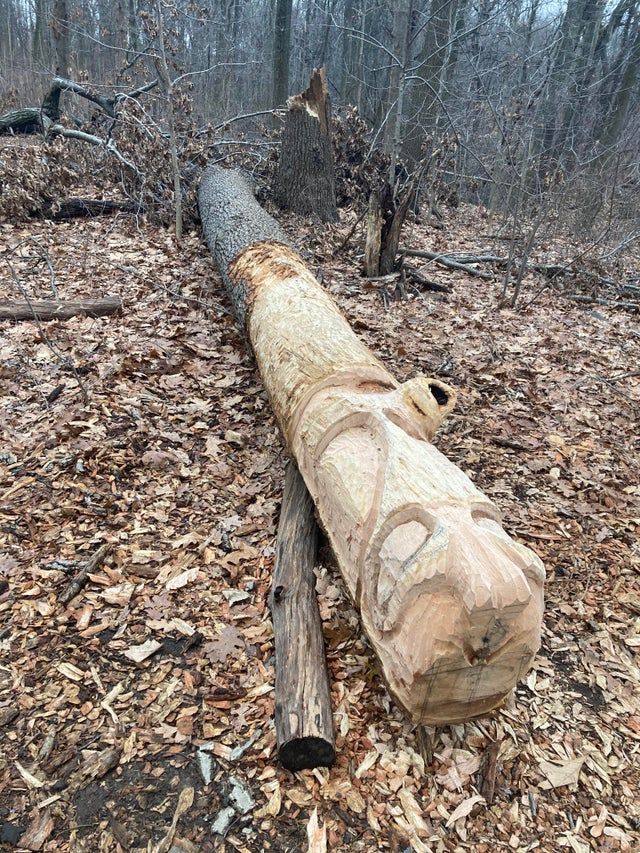 At least, we would hope that this totem pole that was beginning to take shape was a work in progress when someone found it in the forest. That would be a lot of work to abandon.

16. Something's fishy about this.

When you stand up after sitting for a while, you can generally assume you're leaving a butt print on your chair.

But would you ever expect to leave a Poseidon-like trident on your seat? Because someone did.

I guess when you mix together a bunch of rocks for this type of flooring, it's not impossible for other things to get mixed in so well.

But it's still odd to see half a nail shining out from the floor below, too. 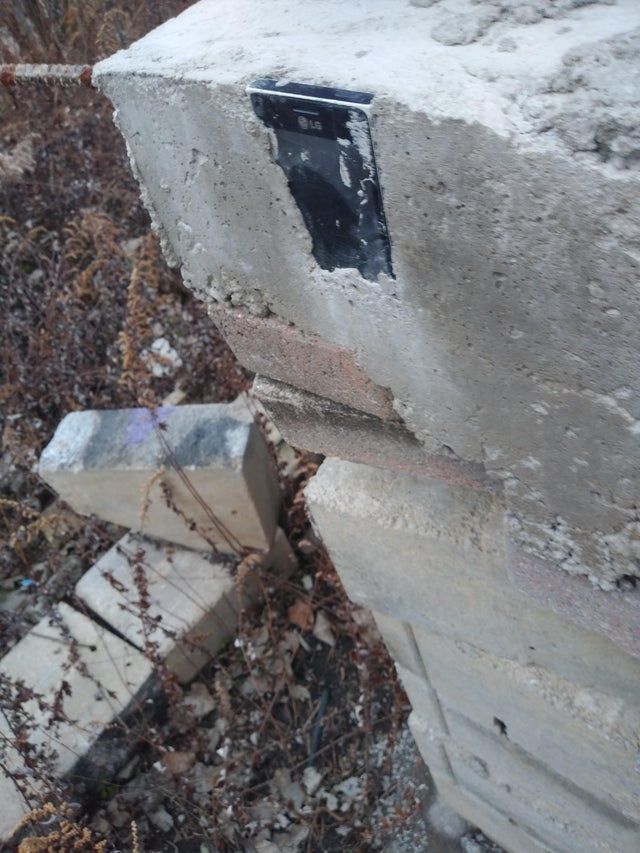 Now, if someone had left a Nokia phone in the concrete mixture, I'd believe it was there as structural support.

But because this is an LG phone, I'm pretty sure someone lost their phone at a super bad moment and they're never getting it back. 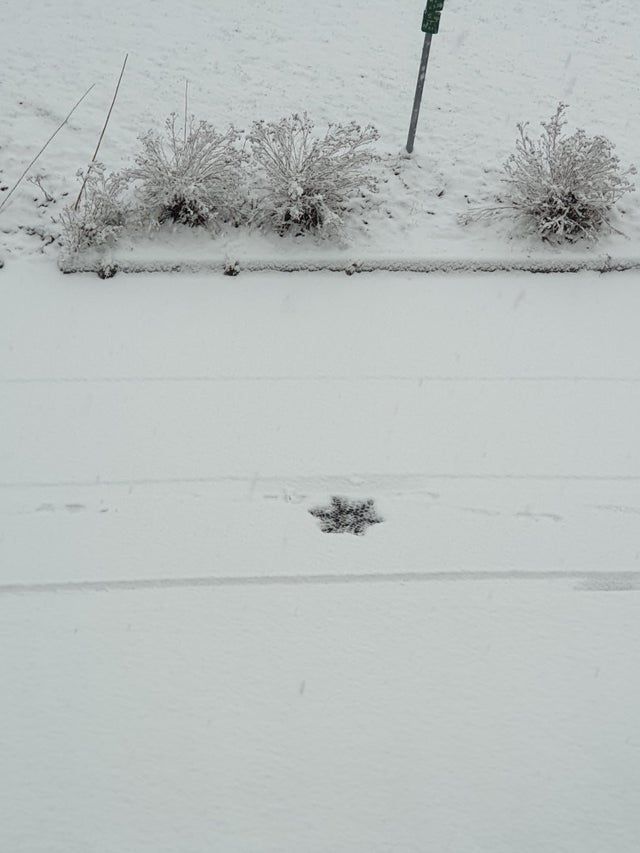 Often, the heat from below a manhole cover will melt any snow above it. In this case, that heat managed to melt the snow in such a way that the manhole cover looks like a snowflake.

20. Cooking up something interesting. 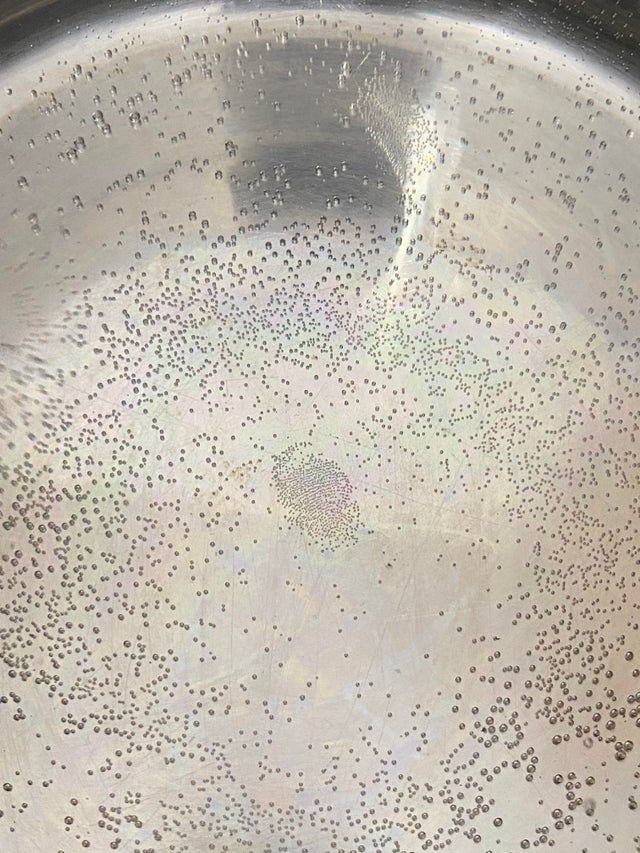 Someone touched the bottom of their pot before it started to boil. You can tell because bubbles have built up perfectly around the oils left by their fingerprint.