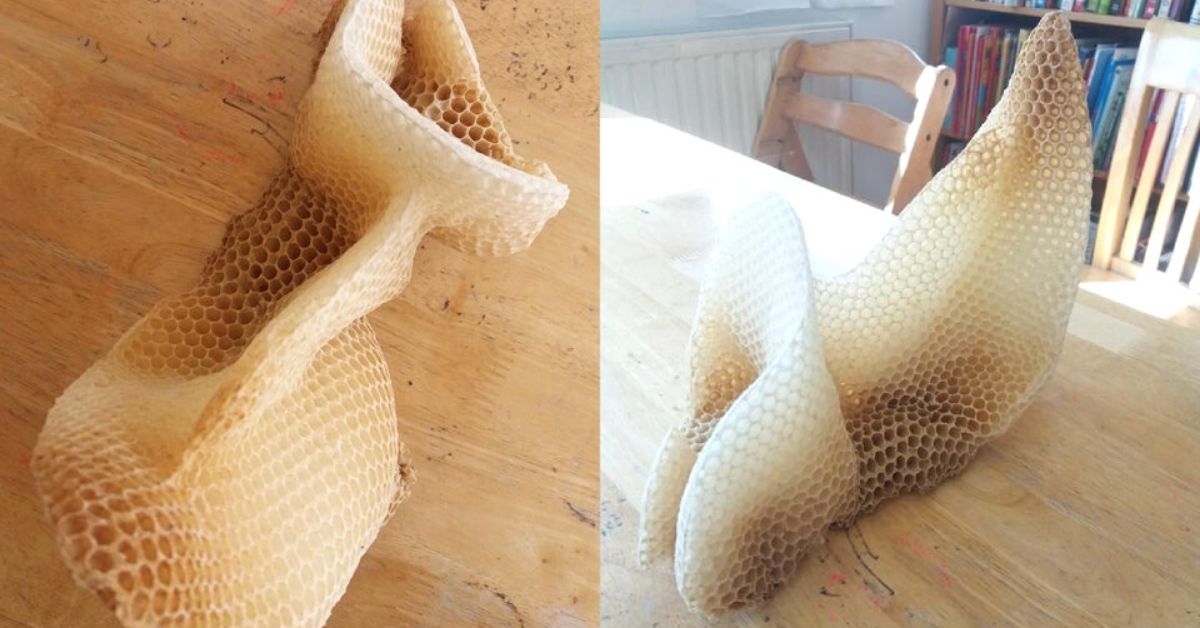 15+ Objects That Are Even More Cool Thanks To Their Backstories

Objects surround us and for the most part, we take them for granted. They're more utilitarian and practical than anything.

But most of us have at least one thing sitting around that's there more for the story behind it than anything else. If you thought you were the only one with some sentimental stuff, check out some of the things below that have good stories attached to them! 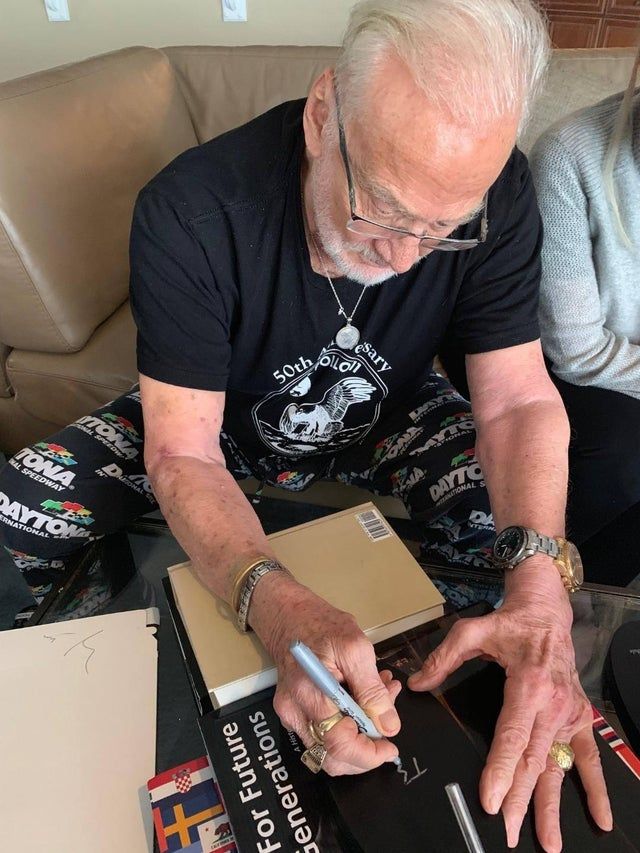 The familiar face is Buzz Aldrin, the second man to set foot on the Moon. For the unfamiliar faces, check out his wristwatch — it's a unique piece with two different faces.

Aldrin is an ambassador for Omega watches, having made their Speedmaster famous after wearing it on his space suit while walking on the lunar surface, but he also sports a design that incorporates both an 18k yellow gold De Ville Chronoscope and an Omega X-33.

As he explained to GQ, the double-watch lets him set the time on one watch without losing accuracy by basing it on the other, an idea he proposed to a watch company in 1970. 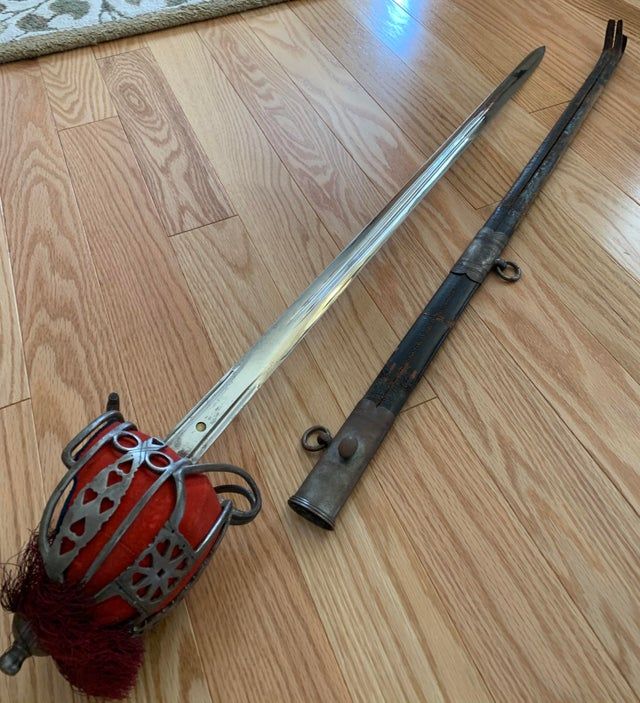 The current owner of this sword explained that they're related to Commodore William Bainbridge, who commanded several ships in the U.S. Navy in the 19th century, including the USS Constitution and the USS Philadelphia.

They're unsure if that's his sword, however; the time period is right, but that basket hilt suggests it's a Highland regiment's sword. Either way, it's a cool item. 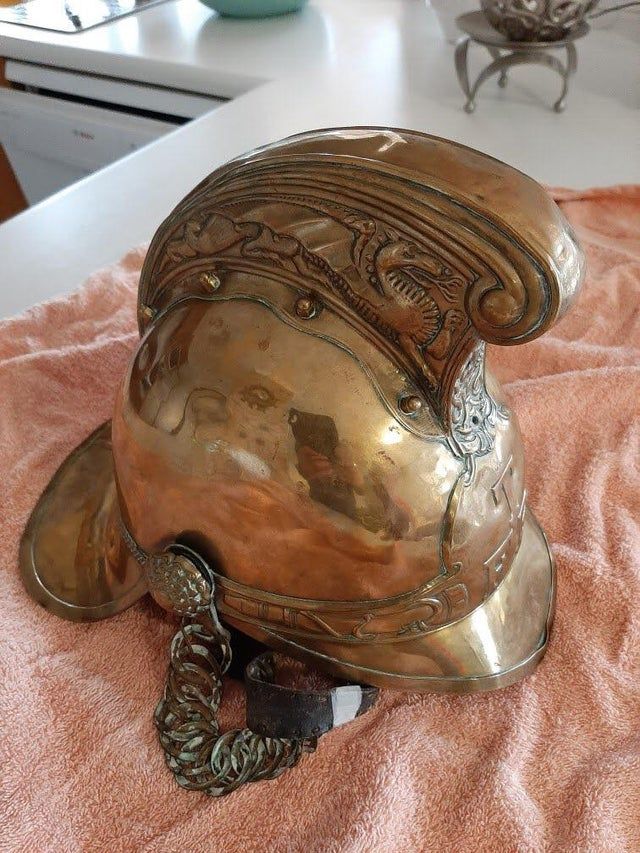 They sure don't make firefighters' helmets like they used to and probably with good reason. Mind you, this old helmet is gorgeous, with details like a dragon etched into it.

And although the brass it's made of would be quite heavy, it served a purpose, protecting firefighters from things like falling debris. As the uploader of this pic noted, the dents in this helmet are well earned, coming from "falling through roofs and whatnot." 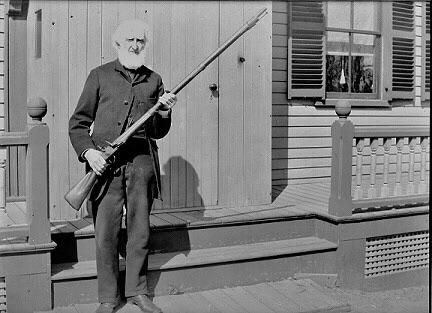 As the uploader of this pic related, the musket likely also saw service in the French and Indian War before the American Revolution.

But the uploader no longer has the musket in the family — its role in the Battle of Lexington, which helped precipitate the American Revolution, earned it a spot in the care of the Lexington Historical Society. 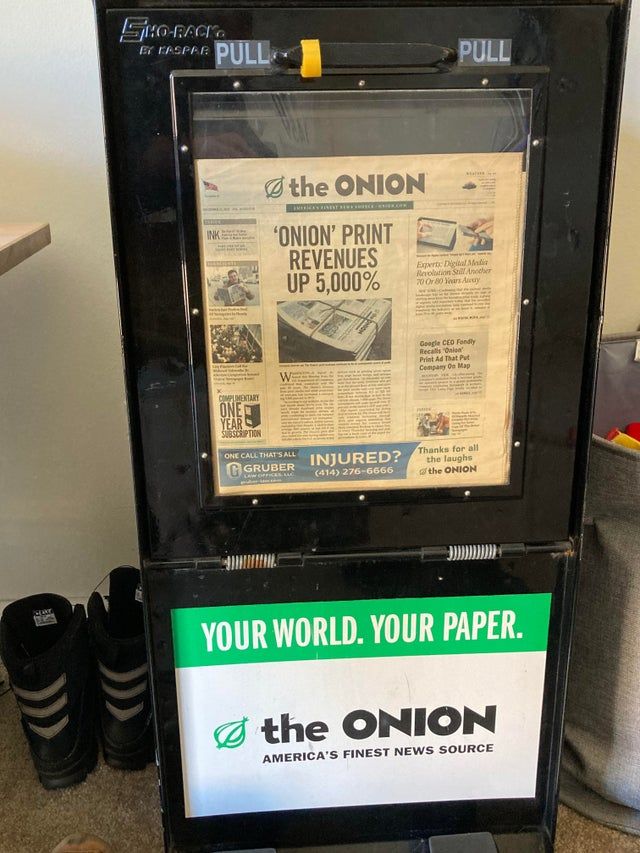 "I have this Onion newspaper box with the last ever print issue still in the display window," the uploader of this pic explained.

"Long story short the head of onion distribution for Milwaukee was being laid off (for obvious reasons) and they told him if he collected the boxes he could sell them off and keep the cash. I paid 20$ for it and had my pick of about 50 different boxes."

6. "Found my Great Grandfather's whistle he used in the trenches of WW1." 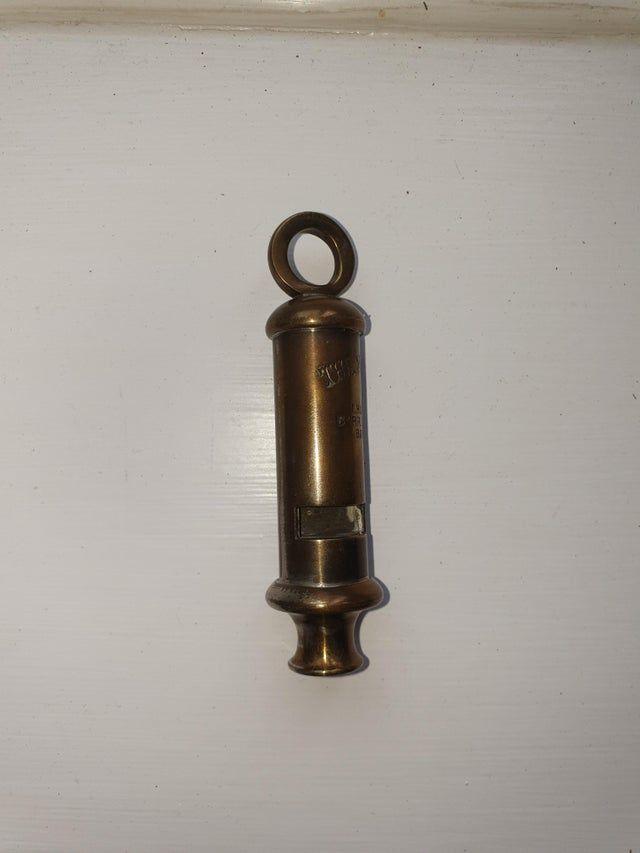 And while whistles are generally mundane and common, in the context of WWI trenches, they're heartbreaking.

The uploader's grandfather would have had to blow this whistle to send another batch of young men over the top and into no man's land, likely to their deaths. 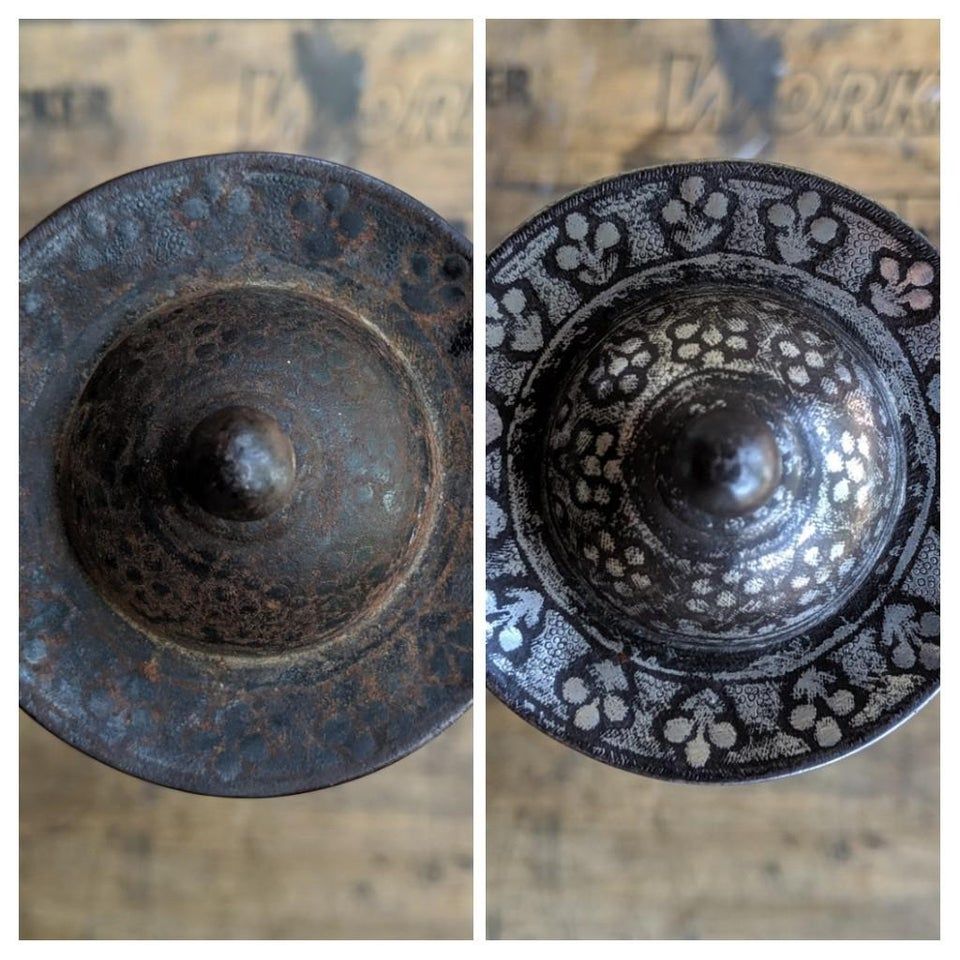 On the left, you could maybe believe that you were holding something 300 years old, but only because it's in such rough shape. But after a good polishing, you can see that some careful craftsmanship went into this sword pommel, and there was a beautiful piece underneath.

"It was very rusty but came out okay and revealed gold and a special kind of steel," the restorer wrote. 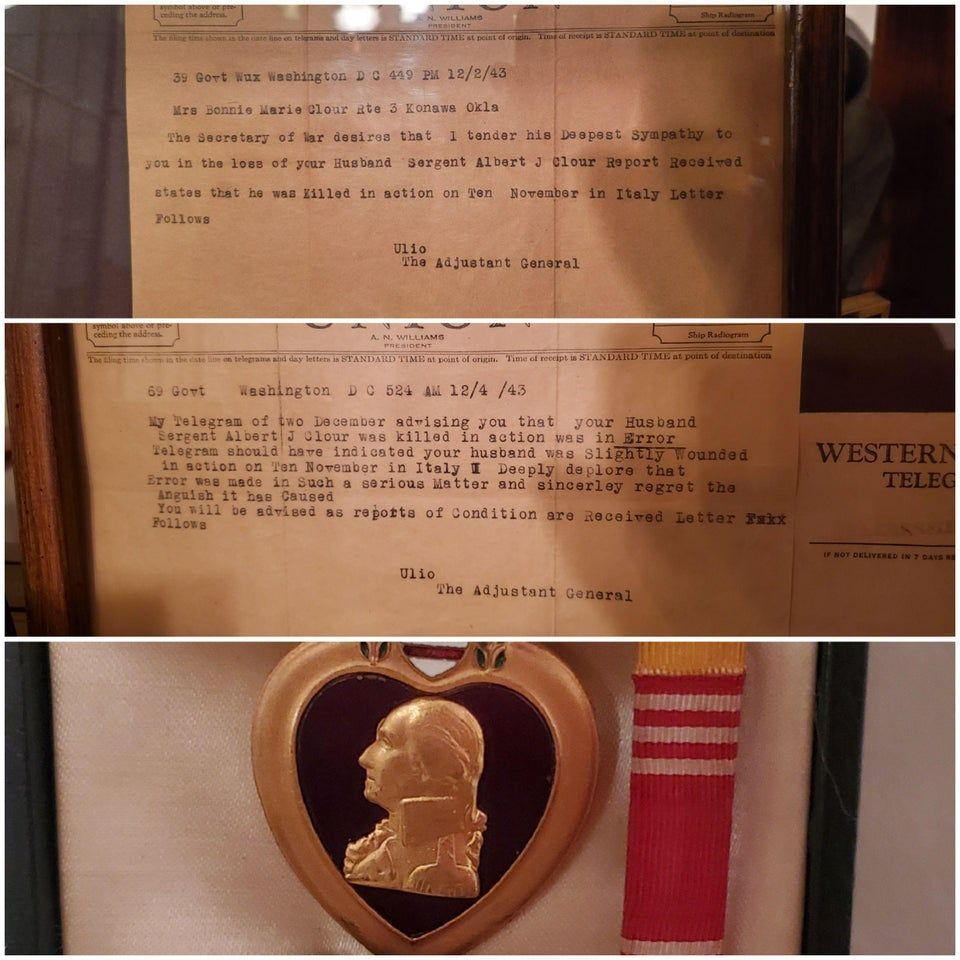 These family heirlooms document what must have been a harrowing but ultimately comforting time.

"My great-grandfather was pronounced dead via mail then pronounced alive as 'slightly wounded' later that week during WWII," the uploader of this pic explained. "He later received a purple heart." 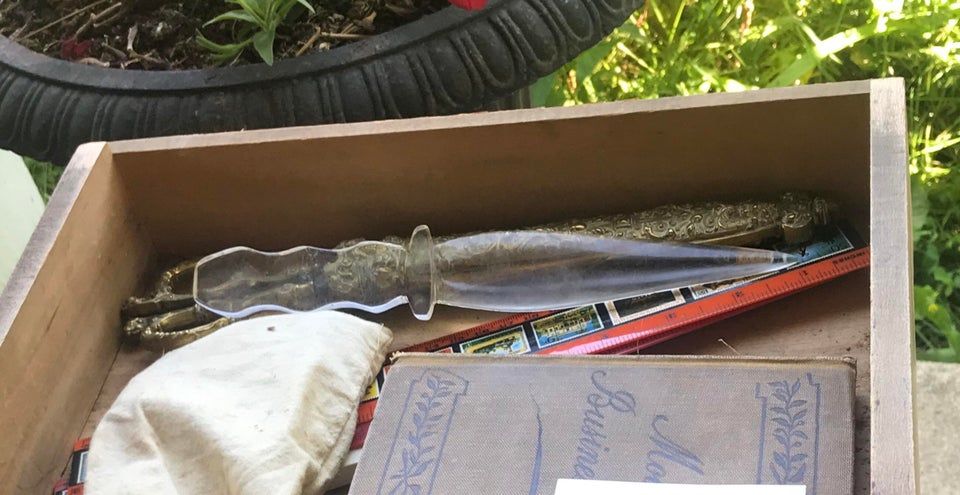 That clear letter opener is also a WWII memento, made by the uploader's great-grandfather from the windshield of a crashed plane.

No word on whether it came from a plane he went down in or if it was from wreckage he found. 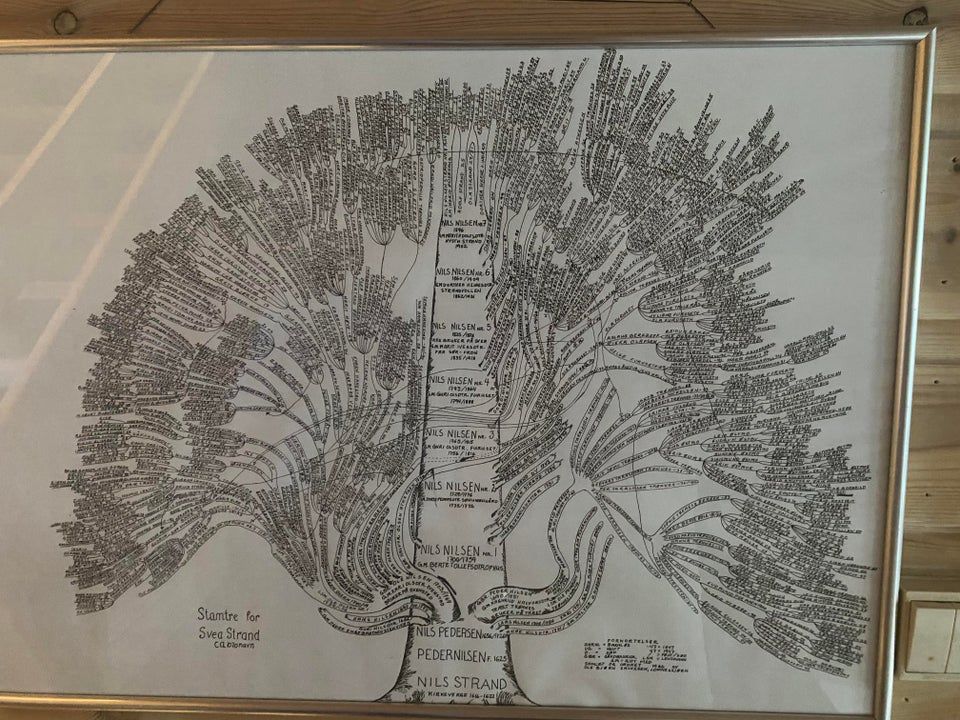 I'm always impressed at how far back some families can trace their heritage — this family tree has some crazy big branches because it goes all the way back to the 1600s. 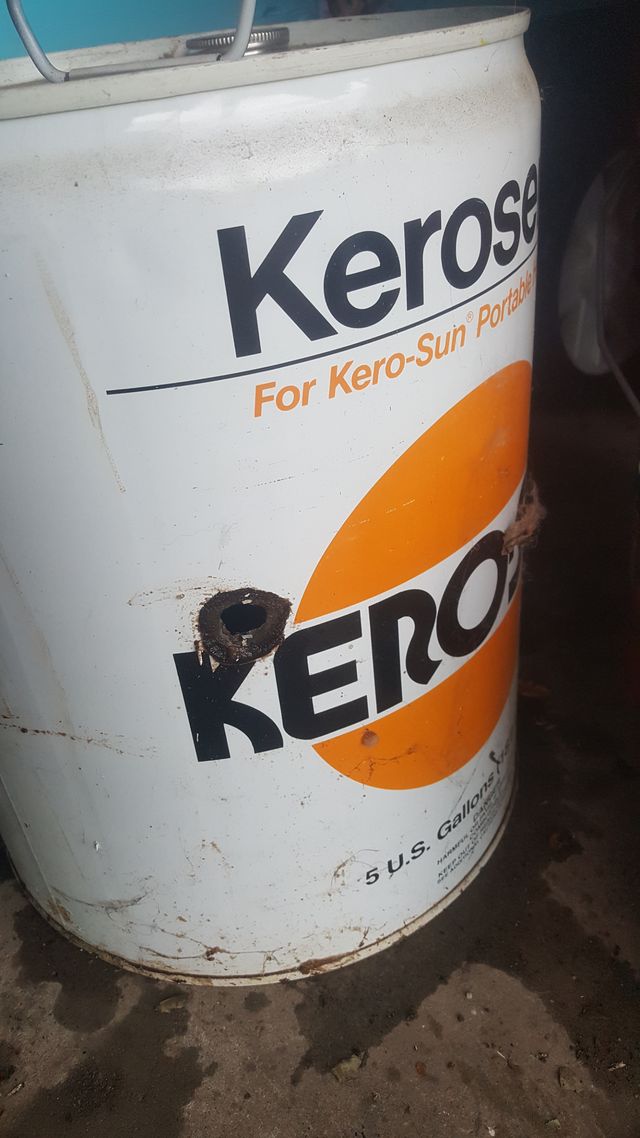 The uploader of this pic found the tank of kerosene years after their grandmother's house got shot up shortly after 9/11.

"The crime was prosecuted as one of the first documented hate crimes in our area," they wrote. "I just completely renovated her house and found this 5 gallon Kerosene can in the garage. It's full of kerosene up to the bullet hole." 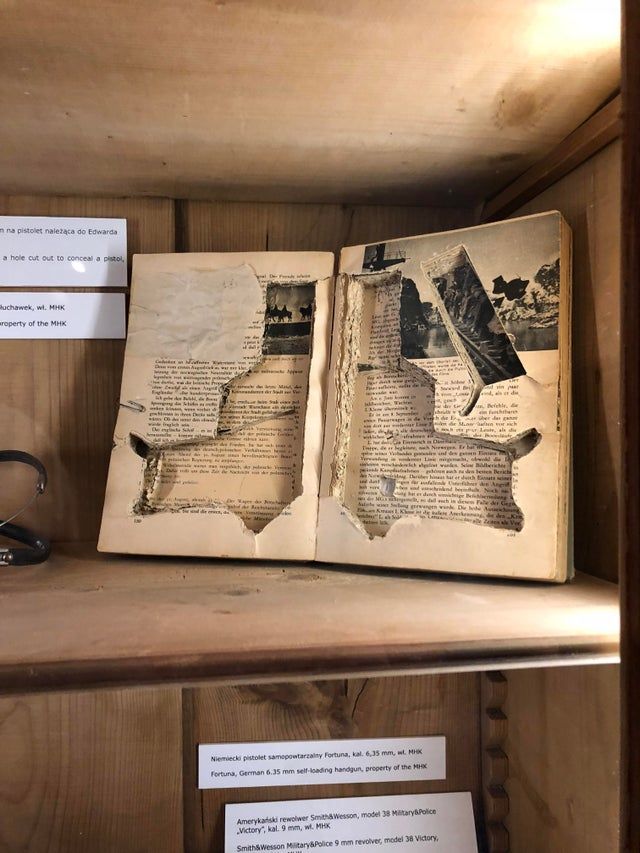 If you thought these were made up for movies, think again. This book hollowed out to conceal a pistol an a clip is a genuine artifact from WWII and is now in the Gestapo Museum in Krakow, Poland. 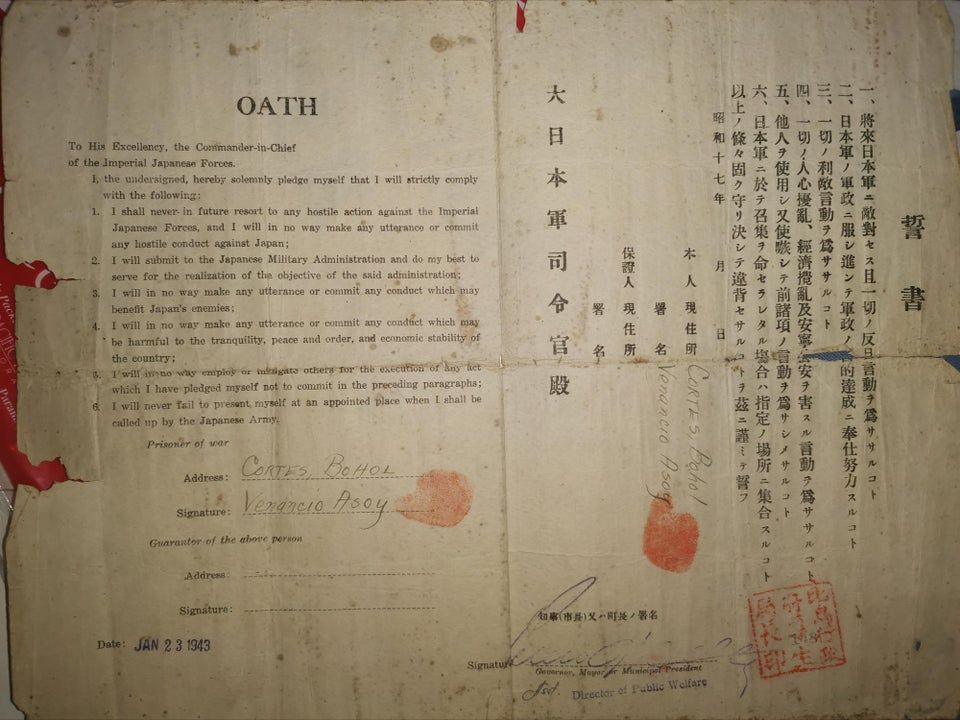 This document constituted the official release of the uploader's grandfather from military life with the Japanese in WWII so he could go back to civilian life. Yeah, I'd hang onto that, too.

14. Yes, this bee is wearing a backpack. 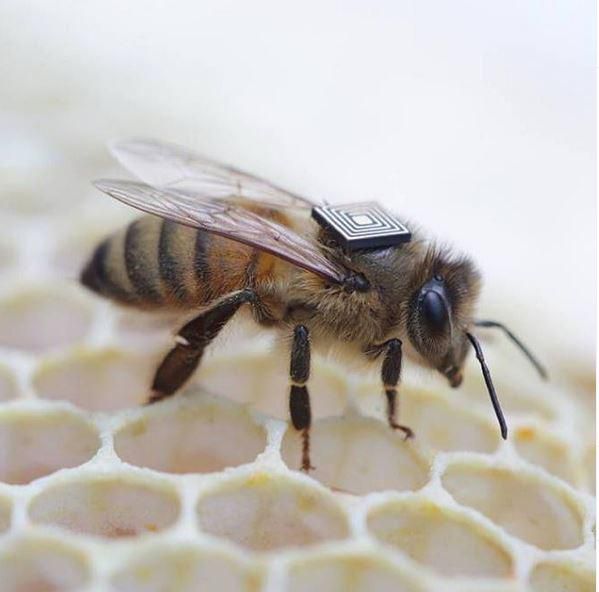 It's really a sensor that researchers placed on bees to track their movements in and around hives for a study out of Australia's Commonwealth Scientific and Industrial Research Organization.

Tagging the bees with sensors allowed the scientists to study how stress factors like disease, pollution, diet, and extreme weather would affect their movements and their pollination, as well as looking at what might lead bees to die en masse. 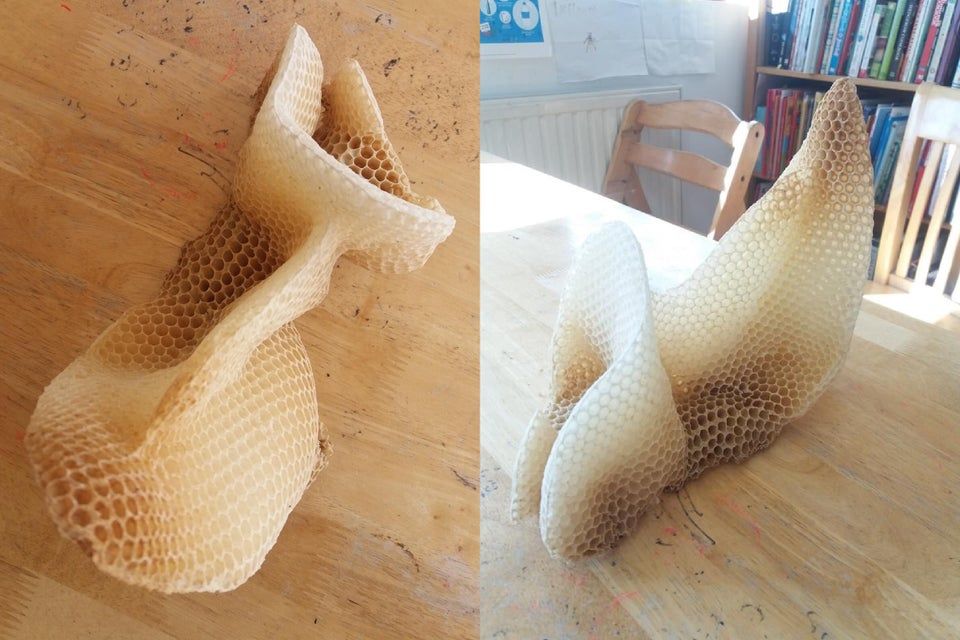 This thing looks like 3D-printed decor, and it sort of is — but it was printed by bees. This was the result of a beekeeper putting bees in a box without a frame.

It apparently took the bees just one week to make. 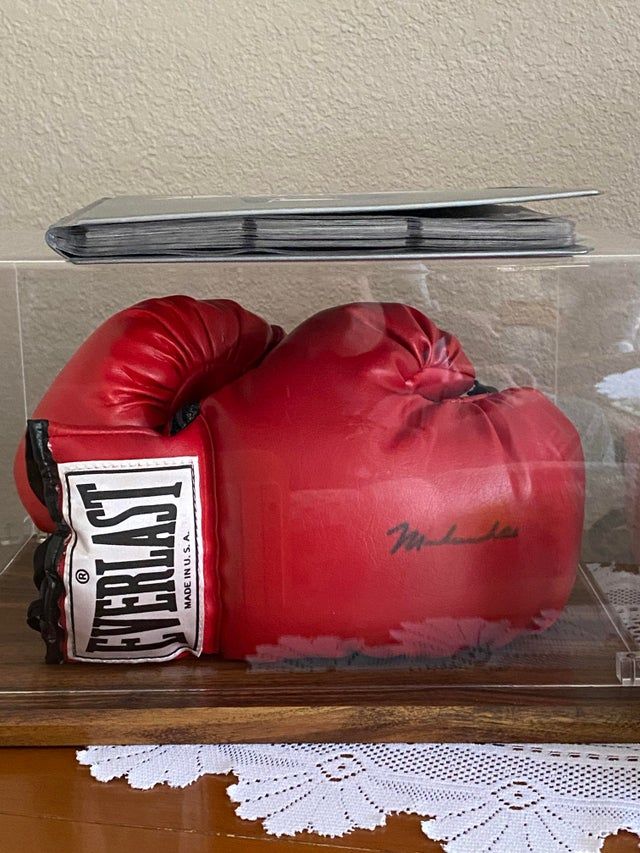 "My grandparents have had these gloves for years. Never asked about them," the uploader of this pic wrote. "Turns out they’re signed by Muhammad Ali."

Sure, authenticity is a huge question mark in the world of sports collectibles, so these could be fakes. But considering how long it took to find out what the big deal with them was in the first place, we might never know for sure. 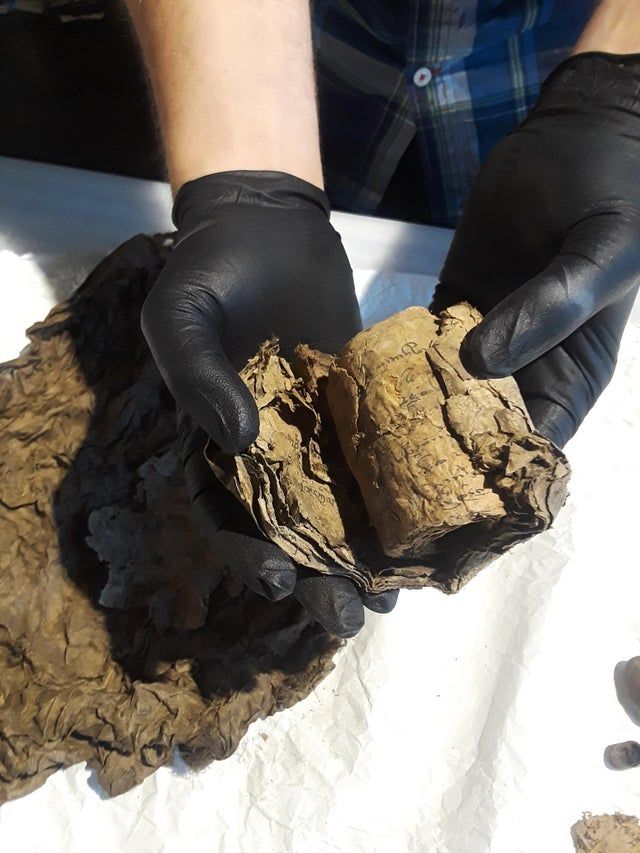 It doesn't look like much but this is actually an incredible artifact.

"I used to work as a museum collections specialist. This is a Buddhist scripture scroll we found inside a fifteenth century Tibetan sculpture," the uploader of this pic wrote.

"In the Buddhist sculptures, we also found human hair and teeth, cremated remains, small clay tablets, and even miniature paintings," they added.

18. "My great grandfather's British Army issue pocket watch along with the German bullet that it stopped in France 1914." 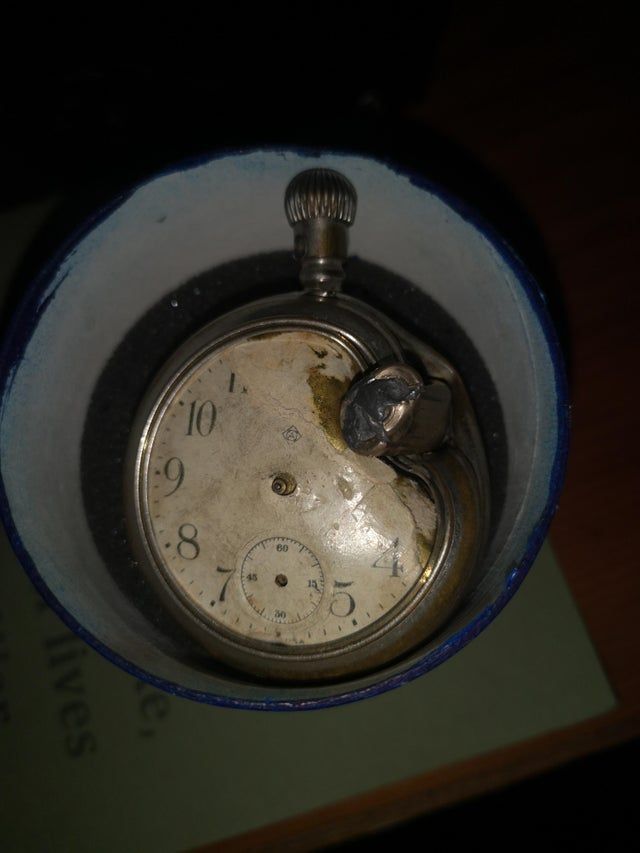 Again, that's definitely a keeper. I mean, is it fair to say that the only reason we can even see this is because the watch worked as a bullet-stopper? I think so.